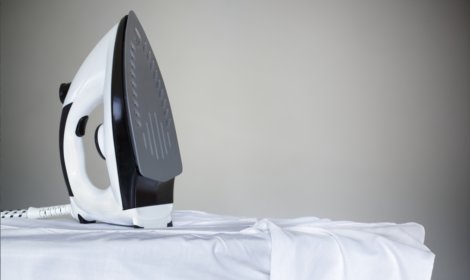 Tonight as I was doing the ironing, I was thinking that I might like to call the finished product of this book something like “The Laundry Monologues” because so often I do my best thinking while I’m ironing. Actually, I’m not so sure I’d call it my best thinking so much as my most in-depth (apart from scary middle of the night thinking when all problems and non-problems seems so exacerbated).

I had to go out and buy a new iron today because my last fairly new one just died. If I was going to be really honest with myself, I’d just admit that it probably wasn’t the brightest thing to refill the water receptacle directly from the tap thereby greatly increasing the chances of getting water into the electrical bits that aren’t supposed to get wet.
I’m detracting from the point of this essay which is actually ironing. Since I left America seven years ago, I have now become obsessed with ironing… everything.  Come to think of it, I’ve become quite controlling about the whole laundry process period.

I remember when we first moved out to Le Pecq, France – just outside of Paris and through my back window I could see my British neighbor and now one of my closest friends, Sara, faithfully ironing piles and piles of laundry almost on a daily basis. At that point, I ironed nothing. Simon did all his own ironing before his first “real lawyer’s job”. After that we took everything to the drycleaners. I’m not even sure I remember if we actually owned an iron the whole time we lived in San Francisco.

Being the curious and vocal person I am, I walked over there one day and bluntly and very incredulously asked in the most mocking of tones, “Do you actually iron everything?”  Poor Sara seemed so taken aback by my thinly disguised disgust that she answered very defensively, “Well I don’t iron towels, if that’s what you’re asking.” I remember standing there dumbfounded that anyone could spend their precious hours at home without children (hers youngest had just started preschool) ironing. IRONING FOR GOODNESS SAKE!!!

It became a very serious topic with me and I started interviewing other women – other neighbors, mothers at my son’s garderie (daycare), the women behind the counter at our local bakery– if they too actually dedicated time to press their clothes.

Every woman in France seemed to have a dedicated “ironing day”. Either that or they had a portion of their housekeepers weekly routine dedicated to this nationally (I’ve now learned that this is actually a European phenomenon) important task at least once a week.  The funny part, now that I think about it is their reaction to my question with wider eyes than my own and more incredulity than I could ever display, “You mean, you don’t?”

I think my personal turning point of enlightenment was when my girlfriend, Audrey-Anne and her mother, Hélène, came to visit me in Paris. Hélène mentioned seeing a mutual friend of ours recently. “Estelle a été mal coiffée et toute froissée. C’etait une catastrophe!” (Estelle’s hair was a mess and her clothes were wrinkled.  She was a catatasrophe!) Well that did it. In Europe, one is actually judged if one’s clothes aren’t pressed. If I think about it, it kind of makes sense. In France, respect for clothing– a source of national pride– is more observed today than religion.

Dry-cleaning in France was ludicrously overpriced. We’d made a very costly mistake when we first arrived (1999) and sent over a few of Simon’s shirts and some of my clothes to a drycleaner in Paris. Not only did the shirts come back in plastic wrap, pinned as if they’d just been purchased — therefore needing to be re-ironed, the bill came to over $100 USD! I’d soon learned to “outsource” ironing of Simon’s shirts to our Filipino housekeeper, Anthony, on a weekly basis.

Considering the continuous exclamations of disbelief from others that I didn’t iron, followed by a swift up-down-up inspection of whatever wrinkled concoction I was sporting that day, I began adding other things to Anthony’s ironing pile – trousers at first (he asked me whether I’d like the crease down front) and then my son Sebastian’s polo shirts and before I knew it, I’d graduated to having our underwear, pajamas and tea towels pressed.

By the time we moved to London several years later, I was all about having the entire family’s wardrobe pressed just-so on a twice-weekly basis. I went to visit my fabulous Vietnamese gay friend (another Anthony) who had moved to Covent Garden from San Francisco for 4 months for work and discussed the whole ironing-phenomenon thing with him. He completely agreed and pulled out a pair of chinos from his very swanky washing machine. It looked like two tubes of brown paper bag, just unraveled from the bottom of a recycling bin, sewn together. He held them up and said, “In the States, I ironed nothing but when things come out of the wash looking like this, c’mon! Wear these pants in public? I don’t think so!”

My English girlfriends were shocked and incredulous when I told them that in America we don’t have housekeepers who dedicate an hour or two to ironing. “You mean American women do all the ironing themselves?” – to which I replied, “No, they just don’t iron.”

Since our return to the States I’ve asked around for housekeepers who include ironing as part of their weekly routine and I get, “In American nobody irons. What do you need ironed?………” After my brief explanation of my ironing needs, this is followed by a disbelieving, “You mean you iron everything?”

Indeed, I seem to have converted my sisters and even my sister-in-law who have all lived with us in Europe for short or long periods of time and who have been subjected to my obsessive iron-everything rule. They too cannot stand to have their husbands’ t-shirts and underwear un-pressed.

I tried, unsuccessfully, to discuss this topic at my first mothers coffee morning with other moms from Sebastian’s class in Connecticut (probably not the best starting point for getting to know other women in America). Not surprisingly, no American woman could see my point. Dry-cleaning in the States is so cheap and convenient. There’s also the permanent press button on the clothes dryer – vast caverns that could accommodate a small car in comparison with their smaller European counterparts. “I never buy anything that needs to be ironed,” quipped one jersey-clad mother. And that was pretty much the end of that topic.

Unlike the French women, I don’t judge poorly nor frown upon my American compatriots who don’t spend hours ironing their family’s things on a weekly basis. I simply look them and their children over  — up-down-up and think, “Hmmmm, that shirt looks awfully wrinkled….”

6 responses to “on ironing”