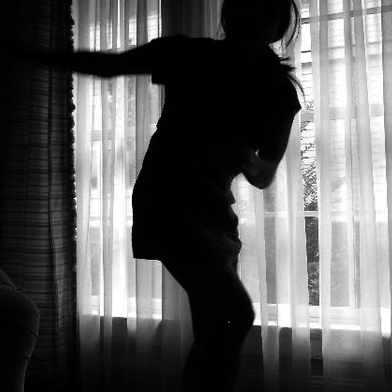 Years ago in Westchester, New York, after I’d drop my kids off at school, I would turn up the radio in my powder-blue, Honda minivan (!) and dance like a crazy person in the driver’s seat as I exited the school parking lot.

Sometimes it was Top 40, other times it was big band, most of the time it was 80’s stuff – Depeche Mode, New Order, Tears for Fears, etc. I would groove away sitting there in early morning traffic, grateful for my few hours of freedom. With one hand on the wheel, the other would sway back & forth to the rhythm of whatever it was that was playing. Sometimes even my fist would come up and I’d beat the air and bob my head from side to side—sorta Stevie Wonder style.

Are you feeling embarrassed for me yet?

One morning I was on my way to meet a friend for coffee. Little did I know, she was driving in her SUV right behind me. When we pulled into the parking lot of Balducci’s (a chi-chi grocery store with a café), she hopped out of her car, came over to the powder-puff people carrier that was my very own dance club and yanked open the drivers-side door.

“Are you out of your effin mind?! You do realise you look like an absolute moronic loser dancing like that? Everyone is looking at you and wondering if they shouldn’t call the paramedics for the weirdo mom having an epileptic fit in her car!”

I remember thinking what a prison that sort of thinking was— to be so worried about how others perceived you, that you couldn’t do what you wanted to do in the privacy of your own vehicle. It wasn’t like I was drinking and driving or smoking with others in the car or doing anything to harm anyone else. I was doing my thing. I was enjoying MY music in MY car on MY time.

I told her so.

I admit that sometimes I can get a little carried away with the whole – “Beat to the rhythm of your drum” philosophy.

One time my husband phoned me from his office in Manhattan. We’d been back in the States less than a year. It was his birthday and I’d sent a surprise to his workplace— something a little unorthodox but fun (!) – at least I thought.

“Umm, Catherine (nervous laughing). So I’m working away, minding my own business when I’m called to reception. The entire floor is called to come and see what you’ve sent for my birthday. I can’t believe you hired a PINK GORILLA SINGING TELEGRAM to show up at my office.”

“Perfect!! I told them very specifically, ‘Make sure the gorilla is a girl— all pink and fluffy and make sure she wears something daring.’ Coconut tits. I love it!”

“Catherine, you CANNOT do that in the American corporate world! Americans don’t have the same kind of humour as the British. That sort of thing may fly in London but not so much over here.”

I think about my British girlfriend, Lucy, sending naughty (anonymous) Valentine cards to all her husband’s work colleagues. I was so impressed.

The birthday boy continued. “In the States, people don’t know what to make of your crazy antics. Someone will probably take offense, file some sort of sexual harassment complaint or something.”

I still have ZERO regret about commissioning that pink gorilla with tropical fruit bosoms.  Besides, it makes for a great story.

I love when things are against the grain. I also recall my Australian friends’ art work in the dining room of their London townhouse. A HUGE painting of two smiling Chinese dudes in white t-shirts — one guy picking the other guy’s nose. I loved that painting!

One of my favorite comments on an earlier posting was from a grandmother. She said something to the effect of –  “I don’t drink but I don’t need to. I have fun, swear like a sailor and dance on tables. Lighten up Americans! Dance! Live!”

She’s right. We are too serious. This world is so damned rat-racey. What’s wrong with a little injection of fun every once in a while if one is being true to oneself and not harming anyone in the process?

A friend and former colleague of mine from my PR days recently posted photos of herself sporting her new hair color. Magenta!! (Fuschia – same diff.) A few hours later she posted comments she’d received from friends, family and neighbours. One of her neighbours was dismayed to condemnation of her new hair color. This fact dismayed me. Why does it matter what color her hair is if she herself loves it? My friend wears one thing that makes her stand head and shoulders above the fray- confidence.  She has my thumbs up.

But back to dancing. When I went back for a summer visit with my girlfriend, Michelle, from the minivan incident, we blared her 80’s playlist. Michelle even climbed onto her kitchen island to dance in front of the kids. They were in awe. Then we helped them up to dance with us. They too need to know that it’s okay to get into the groove if the moment seizes you.

If we can un-learn to judge ourselves, we will have made great strides in being less judgmental of others.

It’s several years on and I still dance in my car – with my kids, my sisters, my friends, my bad-ass birthday boy. I dance alone. When it’s dark and miserable outside and I’m stuck in traffic, I turn up the tunes and let the music lift my spirits. I honestly do feel like dancing improves my overall mood.  Here in England, people will even high-five me and start dancing themselves in their cars (if they’re not laughing at me, that is).

I will finish with this last story. I was waiting in a queue to get into the parking lot of our local grocery store in town, Waitrose. I had the music turned up and again, I was bobbing to the music. 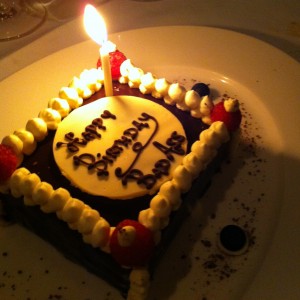 An elderly gentleman in a well-cut suit under a tailored overcoat was walking by the line of cars with his grocery bags in two hands. He stopped just outside the door of my car and motioned for me to roll down the window.

“Oh shit. Here it comes. I’m going to be told off once and for all for my crazy ways.”

That elderly British man in the bespoke suit set his bags down, raised his arms in the air and started dancing right then and there in the car park to Flo Rida.

When the music was over, I leaned out and said, “Sir. THAT was seriously unexpected! There should be more people like you in this world.”

Leaning down to the height of my driver’s seat window, he said conspiratorially, “No, my dear. There should be more people like us in this world.”

Then he bent down, collected his bags and walked away, still swaying to the rhythm of his very own drum.

One response to “just dance”