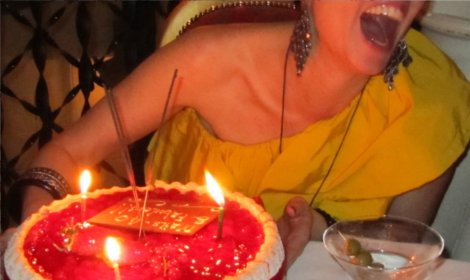 Today is one of the Yummies birthdays in back NY – my beautiful Kristina, and all my girlfriends are gathering for lunch in one of my favorite French bistros – Le Provencal in Mamaroneck. They still include me in everything. I keep getting these sweet emails from them that “It’s not the same! We miss you and will sign the card in your name to show that you’re still here with us!”

A few weeks ago was my other Yummie’s birthday, my sweetest Eva. I was involved in helping plan her surprise and knew every step of the way, what was happening the day of. Ten days ago, I flew to Italy to surprise the most hysterically funny woman I know– Michelle, whose husband had organized a week in Tuscany with her family and close friends to celebrate her 40th.

I realize that I write about these women in the possessive. It’s not because of any misplaced sense of ownership, obviously. It’s because they are my core. Like any woman with a set of close girlfriends, my NY girlfriends have become a part of me.

Today I imagine them all sitting at one of the large, round tables in the lower section of Le Provencal’s cheerful dining room with its endearingly cliché photographs and paintings of the South of France hung under shelves with ochre jugs of sunflowers or lavender from Grasse.  I see lots of color—colorful walls, colorful conversation, vibrantly colorful laughter and of course, their requisite “colorful” language. I picture them catching up on the daily minutia, school gossip, the latest developments of one of our kids—his sports, her new teacher, his new school, etc.

It’s said that in cases of departure, it’s always easier for the one who has left- because the ones who’ve been left behind must deal with the void of that person’s absence. Where there used to be “her” expected input or habitual outrageous joke– there’s now just silence.

The group carries merrily on but for those remaining few that are still trying to adjust to the pain of the absence of that friend, they will insert a reassuring, “You know, if XX were here, she would have said something like…”

I can report, that *this* girl thinks that statement– about it being harder for the ones left behind– is complete and utter nonsense.

Yesterday I was invited to a lunch by a group of women I’d met at orientation at the beginning of the school year. It was one of the women’s birthday, a tall attractive brunette with an ebullient personality and contagious banter. Another lady suggested that regardless of our feelings about suddenly finding ourselves in these new environs, we should all make a concerted effort to come out once a month and celebrate each others’ special day—that if it so pleased us, we could contribute a nominal amount towards a friendship bracelet for each celebrant so that by the end of our sojourn here in England, we’d all have the wonderful memories of these lunches and a souvenir of this unique friendship we’d founded.

At first of course, I was a reluctant—“I’ve just met these women and birthdays are, well, intimate.” And yet, I recalled the famous British wartime chant and that well-known British penchant to pull oneself up by one’s breeches and “Do it for Britain!!! Britannia! Britannia! Britinnia leads the way!” Okay so maybe I was getting a little carried away but that’s how much mental motivation it took for me to agree to a birthday celebration of someone not part of my inner circle.

I pondered the email invitation and then thought, “When in Rome…” and hit the “send” button.

The thing is, when you first move to a new country, you meet so many new faces and are given so many new names to memorize. You may see these same people again and again through school or football games and yet, you can’t for the life of you remember their names. For the first couple of months this whole unfamiliar sea of faces is an anonymous “grey”.

And so here, at a charming restaurant in Oakley, Windsor I found myself with a group of very friendly, slowly-becoming-familiar-to-me faces – many of whose first names I had actually yet to learn. Armed with my new “Britannia!!” attitude, I was determined to seal the first name of every woman at this lunch into my reluctant memory bank. I was determined to make an effort!

To my surprise the more we conversed, the more I learned we have in common and the lovelier I found them. The grey was slowly but surely revealing color.

This one lived in Vancouver for the last ten years. Amanda. Beautifully-tailored red blazer.

This one, in a cosy-looking green sweater, identifies with my feelings about suddenly realizing you’re not the “young mum” at school. Jill. Gorgeous green.

This one feels the same way I do about the healthcare debate raging back home. We’d met several times before— orientation day, on the soccer field, parent meetings but I could never remember her name. Theresa with rebellious curls in a warm brown dress.

And then there was “Nancy” who sat across from me at lunch whose name I did know (!) We’d met on the first day amongst the sea of unknown greys and I’d found her incredibly compassionate and kind. Nancy, like me, is here on a second relocation to England. She loved it in Windsor–where’s she’d lived the first time– so much that when she found out her family was moving back, she picked the same area. Nancy is color from the word “go”.  She’s warm and welcoming– so much that she greets their new lives here in England with vigor, “I could live in England forever,” she’s asserted to me happily several times.

At the lunch however, she admitted that all these feelings of elation were dampened by her thirteen year old daughter who’d hit “a bump in the road” in her transition to her new life in England.  She talked about how, when they left the States for good, her husband had bought the family first class tickets to make that poignant journey even more special. Special indeed—rather than enjoys the perks of not being in the cattle car, she and her husband had to witness their daughter’s heartbreak from take-off in San Francisco, to landing at Heathrow. Her daughter, seated in front of her, sobbed inconsolably for the entire flight–  only to land, hold it together long enough in the car ride to the new house in Windsor, and shut herself away in her closet upstairs in her new room (which she’d never seen up till that point).

All this came up because coincidentally, yesterday was that little girl’s birthday as well. Nancy explained that her daughter had seemed to be doing so well recently and was making new friends and adjusting to her new teachers. For this birthday, Nancy and her husband, wanting to do something extra nice, offered her a choice of two very generous gifts- tickets to rock concerts by two of her favorite popstars or an expensive, “fully loaded” phone.

But without realizing it, their efforts to bring their daughter joy instead opened some yet-to-be-healed wounds. This was their daughter’s first birthday back in England. Her first away from her friends back home.

My new friend sat back and sighed and said that this was something that their family would have to overcome. The rest of the women around her offered tidbits of parental wisdom and reassurance that “this too shall pass”. I listened quietly to the coos of psycho-babble.

As they spoke, I took a sip of water, pushed the salad around on my plate and realized that I identified with that little girl far more than I realized.

I held my composure although on the inside I was screaming, “That’s me! Your daughter is me!!! I am a thirteen year-old who wants to pout and brood,  but because of what’s expected of me as the mother who must set a good example of adaptability for her children and as the wife who follows her husband and his career dutifully around the globe, I have to hold it together and put on this d-mned ‘Britannia-leads-the-way!’ face even though I am dying from grief on the inside. I too miss my friends!! I too want to go home. NOW!! I too find myself on FaceBook more often than I should scrolling, searching madly looking for signs or writing on my Facebook wall that I still mean something to them, to someone back home, to anyone! I wake up, each day, thinking that I’m getting better and that I can do this—that I’ve done this before and that I can do it again, that I’m strong. And yet, if someone were to be too nice to me– try to give me something, like a birthday present, I’d crack!”

I could relate entirely to this child whom I’d never met. I could hear her thinking, “It’s my birthday. My special day and I don’t feel particularly special right now and no amount of presents or tickets to rock concerts or expensive phones are going to do it for me. I’m hurting. I’m mourning and it doesn’t help that everyone around me is being so brave, so happy, happy. It doesn’t help that my parents love it here– that my mother never wants to go home, to my home, where I belong— where everyone knows me.”

Thankfully, I was snapped out of this fast-road-to-a-very black-no-where by our happy birthday celebrant, Red Amanda, who cheerfully described the going away gift of an amazing set of friends she’d left behind in Canada. Each had given her an antique brooch (apparently she collected them). She waxed on about how each brooch represented their giver so completely. She relayed her profound gratitude and utter surprise that she’d discovered this new group of women—us– so fast.

“I opened the email from Jill inviting all of you to celebrate my birthday and I couldn’t believe that I happed on this wonderful group of friends so quickly. I feel like I’ve known you all for years!”

At that point, Jill presented her with a beautiful package from Links of London with the shiny new friendship bracelet from all of us — her new friends. Everyone sat back smiling. I forced the ends of my mouth up to mimic their expressions.

I marveled at how smoothly Amanda had transitioned into this new group and how at ease everyone else seemed around each other.  I sat back in awe and frankly, admiration at how easily she could embrace these women whom we’d all barely known. We’d all just arrived a few months prior.  I couldn’t help thinking that if I were given that friendship bracelet at this point in my transition to my new life in Surrey, clasping it around my wrist would somehow represent a sort of disloyalty or betrayal to my Yummies back at home in NY (although I know they would never, ever see it that way). I stared at the shiny band swinging on Amanda’s wrist as she continued to gesticulate about her new comings and goings here in England and was silently grateful it wasn’t my birthday. Like Nancy’s daughter, I would have wanted to shove it far away so I wouldn’t have to look at it closely and deal with the reality of my new life here being so… real.

I looked around the table and realized that although I’d opened myself up enough to allow this new group of women to begin to show me their own beautiful, glowing colors the only “grey” person left in the room was me. I hope and pray that by the time my own birthday comes around to be presented with that same friendship bracelet, I too will be ready to show my colors again.