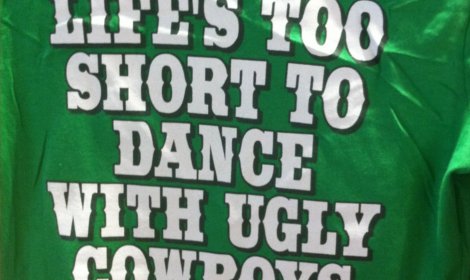 I went to Texas for the first time ever this past summer. I was in Austin for a night and Fort Worth the next. I realize two and a half days are nothing to judge anything by but I keep getting asked what I thought of the Lone Star State. My impressions are definitely Texas-sized. I’ve never written a Trip Advisor review. If I were to write one though, this is what it would look like:

T is also for TALL:

▪          TALL men in cowboy boots who charmed me with their slow, syrupy southern drawl;

▪          TALL (higher than I’ve seen in any other state) flag poles everywhere proudly announcing “This is Texas!”;

▪          TALL iced-tea that you down in huge gulps in an attempt to keep you cool in the hottest, driest heat I have ever experienced.

T is for TAXI cab drivers in Austin who don’t charge you any fare (from airport to hotel) and just ask for a hug in lieu of cash. Try that shit in NY and you WILL get clocked for being a perv– faster than you can say “Empire State of Mind.”

T is for “TEXAS-SIZED” plates of food that could feed a small nation: cowboy cuisine, Mexican food, southern cookin’: T-bone steaks served with cheddar and jalapeño grits and all kinds of amazingly yummy stuff that I’d never tried before –deep fried pickles, fried-green tomatoes, fried peach pie— are we seeing a theme here?

T is for TRIGGER- you know, as in guns. There’s even a sign on the revolving doors at the airport with an image of a firearm and X through it– just in case you forget NOT to travel with your weapon. I took a photo of course.

T is for TIME- why do southerners seem to have so much more of it? Maybe they could box some of it up “real nice now” and send it over to us New Yorkers?

T is for TARMAC- for the private jet that apparently “every self-respectin’ Texan (cowboy) owns.” Yeah, okay. That’s why you’re sitting next to me in the airport’s Southwest lounge preparing to ride cattle class like the rest of us. I’m sure the jet’s just “out for maintenance”.

T is for Tara and Tracey and Teresa who are all from Texas. T is not for Maile, David, Mike & Molly, Fernanda & Jesús, Michelle, Amanda, Anali, Lis, Stephanie and Mariana…. who are also from there. It’s where Augusto & Elan will soon settle too. It’s occurred to me that so many, many great souls hail from the Lone Star State. T is for Trina who is not from Texas and a Yank like me but her name starts with T and she’s one of my best friends and this almost rhymed so there you go…(Honestly, I should have been a f-cking poet…)

T is for TAX: as in NO INCOME TAX which will lure more of my friends from NY and California.  Or maybe they’re just going for the chicken-fried steak….

T is for T-SHIRTS with messages like: “Life’s Too Short To Dance With Ugly Cowboys”. I arrived as New Yorker saying, “I could never wear the hat-and-cowboy boots look — just not my style.” Then after violently prying the boots off the feet of poor unsuspecting Tara to pose for an after-dinner drunken photo in a saddle, I decided that actually… cowboy boots are kinda cute!!  So I got a T-SHIRT that says, “Die With Your Boots On.” It goes nicely with the cowboy boots that of course, I just HAD to get.

T is for TUNES – country music (!) with names like “She’s Acting Single, I’m Drinking Doubles” or “My Friends Are Just Like Yours — Only Prettier.”

T- is for “THANK YOU y’all!” — for your warmth, hospitality and southern charm. I totally get how Texans love their state with a white hot love. I hope to visit again real soon now, ya’ hear?