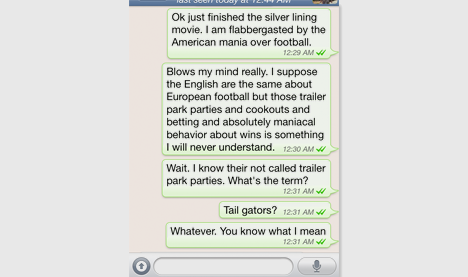 Some women are gifted athletes, dedicated fitness enthusiasts or true-blue “sports moms”.  I am not one of them and hand-over-heart, I am not admitting to this with pride or vanity. For some reason of late, people keep asking me if I do sports. Not really. Actually, no. Now that I’m posting this essay, I am publicly throwing open the kimono on something about myself that I find genuinely embarrassing—that I am a sports moron.

Almost every single one of my friends does some form of exercise on a regular basis. Eva and Molly run- if not every day then every-other-day. Fernanda and Holly are at the gym daily. Kelly does something called PX 90 or is it 80 or it is it called something else? Tracey and Tara are avid and dedicated tennis players. Pretty much all of them ski. I admire them all immensely for their athletic prowess and self-discipline.

There’s a reason though I don’t do sports. Not only am I a mind bogglingly bad at any attempts I’ve made at sports in my adulthood, I just don’t get the game and by “game” I mean the rules of any and all athletics.

The first time we moved to London many moons ago, a neighbor suggested I take private tennis lessons to 1) learn how to play the sport and 2) get into the social scene of local tennis circles.

Enter Chris. He worked with me for a little over a month and at the end of what was destined to be the last time I ever touched a tennis racket he said, “You know, in my entire tennis career, I have never seen a forehand as bad as yours.” He didn’t flinch as he uttered the following sentence.  “And I just remembered (!!) that I have to go hiking in Tibet so I’m not going to be able to continue these lessons any longer.” HIKING IN TIBET. I can’t make this stuff up.

I grew up in Vancouver, B.C. – home to Whistler country and what I hear is some of the best skiing on the planet. I wouldn’t know. My first boyfriend was a ski instructor from the French Alps so I figured I would learn to ski “someday” but my avoidance of the sport lasted much longer than the relationship itself.

Fast-forward to Christmas 2010. I tried my hand at skiing for the first time in my life in the very mountains of that first boyfriend’s provenance – Chamonix, Mont Blanc in the Alps. I took private lessons with a very supportive older chap who was far more generous than “Chris-the-encouraging-tennis-instructor-turned-supposed-hiker-of-Tibet” in his faith and praise of my beginner abilities. When he handed me back to my husband after several hours of instruction, he declared me “A Natural” and sent me on my merry way.

Simon was thrilled and had me follow him and the boys down a run. Less than enthusiastic about my brand-spanking-new skiing abilities, I followed my “pros” with trepidation. With each precarious turn down those trails, however, I could feel my confidence waning. We came to a clearing and I found myself on this huge foreboding hill. Skier after expert skier whizzed past me at breakneck speed. Every single thing my kind instructor had taught me was gone like yesterday and all I could imagine was me trying to negotiate a turn at the edge of the mountain, careening spectacularly over the cliff and dying a premature and glacial death.

Mortality hit me like the whipping wind and I froze. I could see my boys – tiny little stick figures in the distance — waving at me wildly from the bottom of the hill to just “ski down already!” Simon, who was still at my side, was gently trying to coax me down as well but I couldn’t hear him above the tumult of the death demons wailing in my head.

And then I reacted. The strength of my anger had taken over the power of my fear. Somehow I was able to break free from the fear-gripping paralysis that had seized me and clear my mind just long enough to kick off one ski at a time. I bent down, picked up one of the skis and with every intention of using it like a samurai sword to commit public homicide, I swung it at my husband’s head with enough violence and rage to put the notoriously angry John McEnroe to shame. I went downright ballistic. I don’t remember the exact terminology I used but it involved many, many iterations of the F word and every possible insult recorded in Oxford’s AND Webster’s dictionaries combined. I shot out profanity after abusive profanity at a speed faster than any of those black-diamond skiers—never once taking a break from swinging that very conveniently long weapon (I missed, by the way. Simon is nothing if not agile on the slopes). And when all my energy on blasphemy and irreverence and yes, murder had been spent, I sat myself down on the well-worn snow and slid all the way down the mountain on my bum.

Our close friend, Mike, popped in for coffee yesterday morning and was enthusiastically talking about a ski trip his family has planned for spring break in the Austrian Alps. He joked about not being able to “see you doing ski bumps, Catherine.” Needless to say, Simon quickly changed topics.

One would think then, given these two anecdotes of my futile attempts at sports, that I might logically reverse this negative psychology, turn it into something good and positive, and transfer my own unrealized dreams of athleticism into encouragement, support and dedication to the sports of my children.

Alas, there too, I’m somewhat of a misfit.

My eldest kid, Seb, has been living and breathing ice-hockey (he’s also a die-hard Habs fan) and soccer (Arsenal) almost his entire life. He is at practice for either sport six days a week– often till midnight. My middle child is a soccer player on defense. (Is that even the correct terminology –“on defense”?

ANY and all achievements, accolades, knowledge and training that my boys have procured in sports are a direct result of their father’s dedication and enthusiasm. I just do the driving. Or I organize the driving.  I go to their games and I understand that “When the ball or puck enters the opposing team’s net, a goal has been scored.” And that’s about the extent of my capacity to understand the rules.

The men in my family talk in code. “Hat tricks” and “icing” and “deking & dangling”.  I have had to ask Simon to explain to me what “off-side” means after every single hockey and soccer game. Seb can’t take my ignorance. He walks away. Simon sits there and patiently explains something about blue lines and defensemen – sometimes resorting to diagrams with little stick figures. Honestly, if I struggled hopelessly with trying to understand tennis and their “love and romance” scoring system, I don’t know why I even bother with ice hockey or soccer. Trying to explain the rules of sports to me is like trying to teach a dyslexic Cyrillic.

Those who have known me from high-school may recall that I was captain of the cheerleading squad in my senior year. I have (another) confession: I’m a cheerleading fraud. I have NO idea how (American) football works. Yes, I cheered and kicked on the sidelines and performed dance routines at half-time but the only reason I knew whether we were cheering for offense or defense was because I had gotten used to the change-over of shifts and my co-captain and other girls on the squad “helped me along.”

I sometimes even believe that my presence at the game is not necessarily a good thing – what if I unintentionally cheer for the wrong side? At least, that’s what I tell myself when I retire to the comfort of a heated car with the latest Vanity Fair magazine on those particularly blistering cold days when my sons are on the soccer field and I can no longer feel my feet. The maternal support and attendance of my sons’ sports are confined to a very specific and defined range of outdoor temperatures. It can’t be too cold or worse, too hot. I hate to sweat. That’s why I avoid gyms. I find it desperately unattractive on myself.  I can and have been called many, many things in my lifetime. “Soccer Mom” or “Hockey Mom” is not one of them.

But Simon reassures me that even though I don’t get the intricacies of the game, just being there (in my case in the car versus on the actual sideline) and doing all the driving DOES show dedication to sport. Perhaps this is true, but is it enough to score points in the Game Book of Being A Good Parent?

Yesterday Seb’s hockey team went up against the top team in the league. On the way out to the match, he and Simon discussed strategies. They were visibly nervous. It was by far, one of the biggest, most important games of the season.

Being nervous about a big game is a good thing and makes a team keep their collective foot on the gas pedal throughout the entire match. The opposing team forgot this lesson and was overconfident and cocky. I may not know much about sports but I do know this: in sports as in life, arrogance and over-confidence are sure downhill slopes to defeat. Seb’s team won 6-3. The other team’s goalie had been scored on only seven times this entire season. Worse than a bruised bum like I had sliding down the ski hill, that goalie suffered something far more traumatic – a bruised ego. Watching that kid “come undone” actually inspired pity from both teams.

This morning, Julian’s team also tasted victory in football. Apparently Julian continuously “shut them down.” (I just learned that term 5 minutes ago, by the way).

Both my boys have been on a sports high all day long—all weekend in fact. It makes for a cheerful household.

So if that is the only point I ever score – seeing my kids feel great about themselves—in a sport that I myself will never master — let alone understand, then I suppose that will have to be good enough for this cheerleader.

7 responses to “love, black diamonds and icing – a sports commentary”