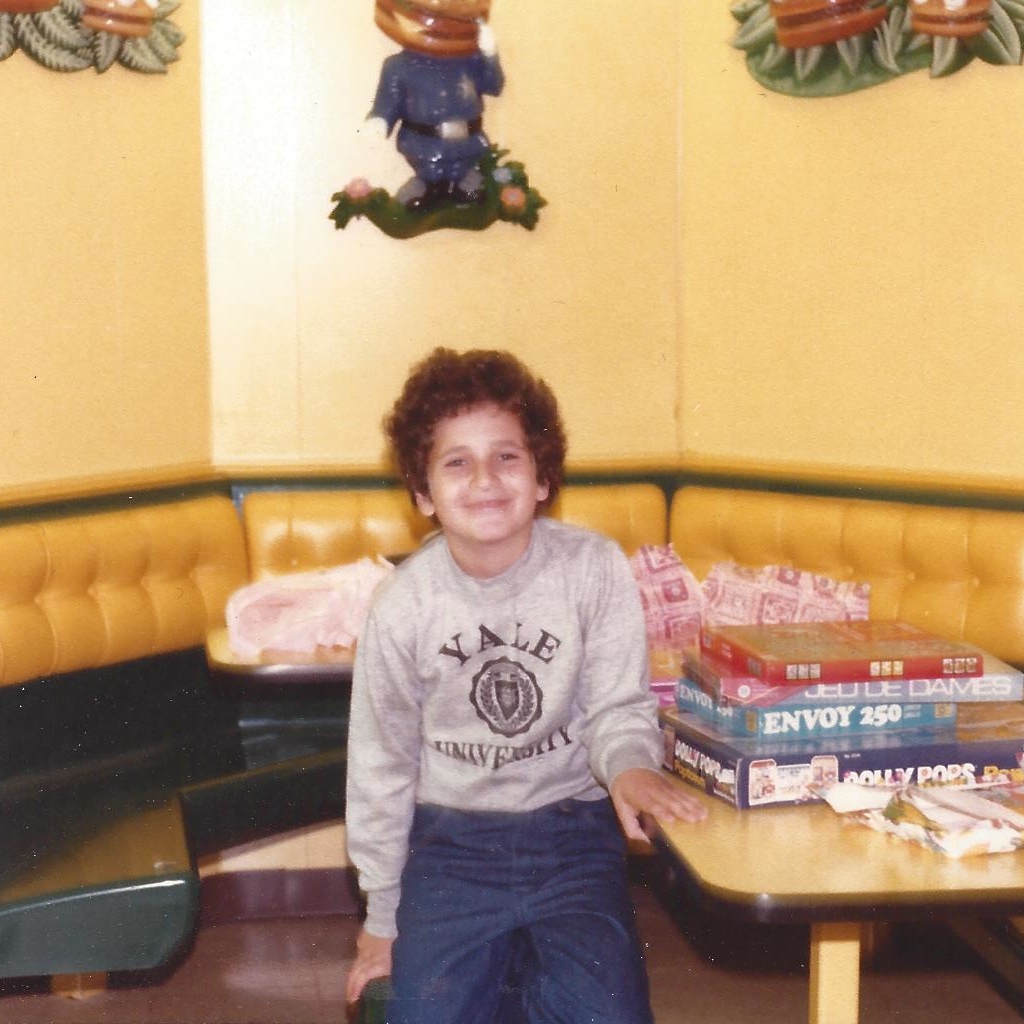 This week my eldest son adds another year to his adolescence and as I look back over his baby photos, I don’t do the usual nostalgic sighs of “Look how much my baby has grown!”

No. Instead I compare his childhood to my own. The delta between our childhood experiences is stark– black and white at their most opaque.

My husband and I both immigrated to opposite coasts of Canada when we were young enough to need to hold our mother’s hand as we descended the metal staircase from the airplane like a small child does- one foot joining the other on the same step, one step at a time– he from the former Soviet Union onto Montreal tarmac and me, from the Philippines onto Vancouver ground—both of us in hard and uncomfortable, brand-new shoes bought just for the flight.

My husband’s father had two things to his name: five Canadian dollars and the promise of a fresh start, free from religious persecution.

I’m not exactly sure how much my own parents had but it wasn’t much more. My dad was in eyewear sales and my mom worked as a receptionist at a hospital. Evenings and weekends, she taught piano.

The school where she taught requested that she give guitar lessons as well. My mother, who has a genius ear for music, had never played the guitar in her life but she picked up that instrument, strummed a few chords and kept her job. The accordion too. She learned how to play and therefore teach it in one afternoon. Being poor breeds creativity.

My husband’s parents were both engineers in St. Petersburg, Russia– electrical and chemical respectively. My mother-in-law has a PhD in explosives. Like my own university-educated parents, they too started from scratch in spite of their higher education. My mother-in-law worked as a housekeeper to supplement her husband’s electronics job. My husband remembers his dad using a soldering iron to work on circuit boards spread out over the kitchen table late in the evenings after dinner to make extra cash.

To say that “money was tight and hard-come-by” is such an understatement, I’d have to dig about six feet underfoot just to underline those words.

I have many, many typical immigrant stories—the birthday party stories where you are so excited to have all your friends over but watch in dismay as they are bewildered and lock-jawed by the spread your parents have put out which was so not the hot-dogs, hamburgers and potato chips they were expecting: lumpia (Filippine egg-rolls), HUGE vats of pancit (noodles), the requisite rice-cooker on the table, and then a meat or whole fish dish (waaaaaaaay before presenting fish with the head-on was considered “foodie-chic”).

The Russian version of producing kids’ birthday party lock-jaw was serving peroshki (meat or cabbage-filled pies), Russian salad (potatoes, green peas, mayonnaise, and pickles) and of course, beets (prepared in any variety of ways). Back then “cool” wasn’t the first descriptor that came to mind when it came to being ethnic.

So the Russian-Jewish boy in Montreal and the Filippine-Catholic girl in Vancouver both felt the same euphoria when several years into their parents’ “integration” they were allowed to have a party at McDonalds.  Hosting birthday parties at McDonald’s were for both of us, the 1970’s equivalent of treating our friends to an evening at Nobu.

And then there was our clothing!!! My husband’s trek out of the Soviet Union was made via Vienna and then Rome. His parents managed to get him beautiful things—Italian footwear and well-cut, wool trousers. He remembers looking down at his shiny brown and white saddle shoes with his plaid, bell-bottom trousers and then over at his new Canadian friends in their sneakers and jeans and feeling like a visual in that nursery-game “Which One Of These Things Doesn’t Belong?”

For my part, my parents took us on a two-week road-trip one summer to interior British Columbia where it gets very, very hot. Our outfits were anything but summer-road-trip-appropriate. Every morning, my sisters and I were made to wear a starched white blouse with a high, ruffly-lace collar and patchwork bell-bottoms. I still scratch my neck involuntarily at the mere memory.

But my husband and I both innately understood that this was part of our parent’s collective policy toward life – “Best foot forward.” And I duly marched – in candy-hard Mary Janes, no less — shiny as a bowling ball!

Our parents worked damned hard and to the bone. My husband and I, regardless of the myriad of feelings associated with being children of poor immigrants, took and to this day, take nothing for granted.

The irony is my husband and I both immigrated again as adults to America so technically my kids are also children of immigrants. I won’t draw unfair generational comparisons because that is not my point. I’ve also already written an essay about privilege but today, on the eve of another family benchmark, my angle is different and hopefully one that my expat and immigrant children, who have never known the poor immigrant experience, will appreciate. My immigrant stories are by no means original but they are unique in their own right and crystalize for so many like us, how very fortunate our children are.