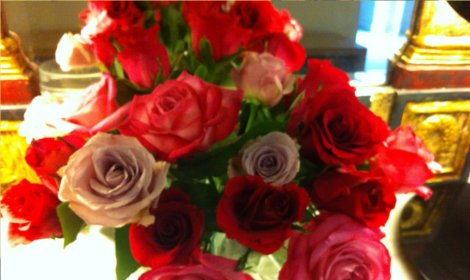 I met with an English girlfriend, Annabelle*, today for lunch at our local café in town. She’s back from having spent the past six months settling into her new life in the States. I‘m always glad to see her. Her mood is always “up” and she’s unfailingly cheerful and attentive. She’s also lovely to look at. Annabelle has a classic, Grecian beauty (her father is actually Greek so this isn’t a stretch)— high forehead, prominent cheekbones and a regal profile. Her pale complexion set against her dark, dark hair is flawless (annoyingly so because I spend a princely fortune on my own skin to look half as decent) but her wide, green eyes keep you focused on nothing else. And when she listens to me recount my comings and goings of the past six months between New York and London, her gazers widen and shine with unfeigned interest.  And then she throws her head back with laughter —grabbing the table with both immaculately manicured hands (tastefully-chosen, killer red nail polish) to steady herself.

When I finish retelling my most recent tale of woe (last weekend’s journey to the hangover-from-hell), Annabelle throws back her head and says, “Oh my G-d. I feel like you’ve just read me one of your hilaaaaaaaarious (have to write it this way to convey Annabelle’s plummy British accent) chapters from your book.”

The conversation ebbs and weaves forward again and eventually we land on the theme of perfection. We hone in on the idea of physical, aesthetic and even design perfection. We talk about plastic surgery. I very much adhere to the Steele Magnolias aesthetic school of thought which I’m convinced was targeted to my age group (the forty somethings): “There is no such thing as natural beauty.” I believe that a woman should do anything she can (and can afford) to make her feel good or better about herself. That said, I also believe that when you can tell someone has had work done, she’s gone too far.

Annabelle believes that perfection or true physical beauty must come with a quirk or a charming flaw and that true symmetry which is esteemed in our society as the beauty ideal  is almost inhuman and therefore almost ugly in it’s artificiality. She asserts her theory is particularly true for a man. I smile wryly because I am riddled with physical flaws so according to her definition, I must be very acceptable.

We talk about my beloved British bulldog, Delilah, who is also plagued, as a purebred would be, with many ailments. This week she’s on another round of antibiotics for a skin condition that leaves her paws red and sore. I tell Annabelle that for all her physical flaws, Delilah is our family’s version of perfect. When I describe Delilah’s suffering of severe eczema, Annabelle’s chin tucks under to the left and she gives me an upwards, playfully mocking stare and says, “Now don’t you think Delilah is being just a little bit dramatic?” I really do enjoy English humour.

My mind then flashes back to another conversation on this same topic that I’d had with my London girlfriends when we last lived here in England  — about seven years ago.

We were discussing one of their neighbours who also happened to be American. I very much remember a collective eye-rolling when the description of her house came up. I feel obliged to note here that the neighbourhood I’m describing is not in your average postal code read: not your average-incomed American. It is hands-down, one of the swankiest areas in London. I have no doubt that the person’s house in question was done by an (American) interior designer.

I can still hear my girlfriend’s dramatically contemptuous tone.

“Meredith* and her perfect house with her perfect window boxes perfectly symmetrical. And then you go in and everything is ‘just so’–  the furniture is all perfectly matched to the window dressings. Not a throw cushion that doesn’t match the curtains, not a lamp that doesn’t match another, just like a show-house from one of those American decor magazines– infuriatingly perfect ad nauseum!”

The others nodded in agreement, albeit surprised agreement because it was so out of character coming from this particular friend who almost never criticises. Shocking really.

“Are your friends’ homes in America like that, Catherine?” one of them asked. [Brits say “America”, Americans say “the States”]

Perhaps because I’m also Canadian, perhaps because I’m not obviously of any visible nationality, my English girlfriends sometimes forget I hold American citizenship as well when they unintentionally break off into one of their anti-American rants. When they do remember though, I’m not treated as such but rather an ally who too can comment on or in this case, criticise my own compatriots.

“Catherine, why do American homes have to have that perfect look about them? Why does everything have to go together and be matchy-matchy? Don’t they believe in charming quirks or the lived-in look? Why do Americans feel this need to have everything look perfect all the time?”

In all honesty, I’m not sure how I answered my girlfriends back then. I do, however, remember being bewildered by the question – not that I’d ever paid that close attention to the (American?) objective of a perfect appearance. Was the striving toward appearing perfect indeed an American affliction?

My mind then comes back to the present – to the perfectly decorated home of one of my closest friends, Tessa*—another “Yank” who lives nearby. Tessa’s home is tastefully, classically decorated but during the three years that her family has lived here in London, she has unassumingly acquired more modern pieces to balance out the traditional style throughout. There is even a plaster hand sculpture prominently displayed on the tv cabinet making an obscene gesture (hilarious!). Last spring Tessa bought a fuschia-patchwork, Kenzo-designed sidechair from Roche-Bobois which currently occupies real estate in the formal living room. It’s modern and edgy and incredibly eclectic given the other pieces in the room—a baby grand, a chocolate-brown English sofa, a Louis XIV-inspired armchair and a stunning liquor cabinet/curio on raised legs.

Tessa was almost apologetic when the chair made its debut, “I know. It doesn’t go with anything.”

And yet, it very much does. The Kenzo piece is the “charming quirk” that balances out to perfection the rest of the room and perhaps what I most love. I would even go so far to as to say that it makes the space.

Does this acquiring of a quirk in regards to one’s design aesthetic make a person less American? I should note that I too have a fuschia-coloured armchair (purchased in Paris about 10 years ago). Have both Tessa and I been subtly influenced by where we live so that we too now believe that even in terms of interior design, “perfection” actually encompasses an element of imperfection?

I know I’m not espousing any new or revolutionary ideas with this train of thought but I do believe this is true on so many levels – and certainly when we go beyond the aesthetic and into the concept of what constitutes perfect inner beauty. But that’s a whole ‘nother kettle of fish and one that I’ll save for another day.

*yes, I’ve changed the names of my friends because I’m a nice person and because I know they would annihilate me if I revealed their identities

One response to “fuschia to perfection”