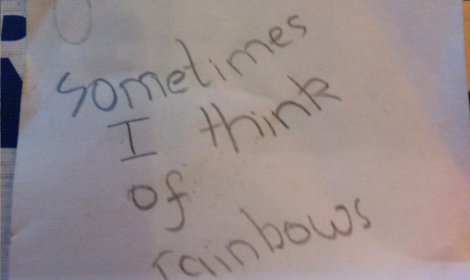 child on board: a post-sandy hook reflection

I began drafting an essay on parenting and cynicism several months ago and then just left it for some reason. Then last week’s tragedy at Sandy Hook in Connecticut happened and now my perspective has changed. In a big way.

On the subject of children, I’ve become quite mean – a veritable b-tch if I’m honest. Someone once told me that we only have patience for children as old as our youngest and up until the devastating news from the other side of the pond, I hung onto that statement with knee-jerk defensiveness to excuse my visible distaste of little people. With my youngest now eight, I have been very rudely open about the fact that I have no patience for any child younger than her. I will even admit that I was so out of order in my anti-younger-child perspective, that I crossed the street if I saw a pregnant woman walking toward me.  What if, G-d forbid, I breathed in the pro-create germ?! No more kids for this cynical, been-there-done-that mom.

I’ve been a curmudgeonly parent now for a while. A few years ago, my poor sweet sister-in-law called me while she was still pregnant with her 2nd child (who is now two) to report that she’d just come back from her monthly ob/gyn check-up and they’d finally determined why she was so overly tired all the time. Anemia!! She needed to get more iron in her diet and take iron supplements, etc. I was more than hurtfully dismissive and disinterested and remember saying to her, “Ummm….yeah… Katya… can I call you later? I’m dusting the coffee table.”

I also don’t mind now admitting what a sad hypocrite I am. Up until Sandy Hook, I was completely over the phase where I found little people “-isms” such as baby talk, for example, cute.  I’m actually hesitant to pen the kinds of things I’d say, I already get enough hate mail. If a small child’s face was smeared with chocolate (which I was enthralled with when my own children were babies and I thought was so endearing!)– my instinct was to want to hand the mother a package of wet wipes. Or bleach.  Whining was my absolute biggest “child-younger-than-my-youngest-child” pet peeve. I was having coffee with a friend a few weeks ago and a perfectly innocent baby started whining for I’m sure perfectly innocent baby reasons. I looked up wildly, my eyes searching for the guilty offender. My (male) friend jokingly asked if the crying made me lactate. Incredulous and without thinking about how it would sound when it came out, I said, “NO! I just I hope that mother shuts her kid up or remove him from the premises.” He was shocked into silence.

The thing is, and I’m not excusing my behavior– I have both teenage and pre-teen sons.  And being the mother of teenagers/pre-teens is hard. In the case of my eldest, he’s huge. Yesterday he stood with his back up to his dad’s and I realized that somehow overnight, my little boy has grown taller than his father. I’ll measure him later but I think he may have actually hit the 6-foot mark and he’s only 14. With him being so tall, I think I subconsciously expect him to be more reasoned in this thinking – to act more like an adult.  And when he doesn’t, I rail against his immaturity. He’s a great kid most of the time—both my boys are. But there are fights and disagreements – with me, with their father, with each other and their little sister …mostly about all of us having to put up with Xbox as their intravenous.  There is also the sense of entitlement that comes with being a teenager. It’s infuriating! And the ingratitude? There are no words. Gone is the cutesy talk of yester-year when it comes to our kids. I have had no qualms about calling both my boys a word that I’m not going to print here if I feel they deserve it. To their faces.

All of us mothers who have teenagers or who have been through this phase get it.

My girlfriend’s son came to visit us in London for a few days right after he graduated from high school. He’s a fine young adult – intelligent, responsible, respectful and engaging. I called to tell her how impressed I was with him and asked how she did it.

“Don’t kid yourself, my friend,” she replied. “There’s a daily mantra I kept repeating to myself all throughout his adolescence.”

“And what was that?” I asked with sincere interest.

I laughed long and hard but she said, “Seriously, Catherine. You are about to enter a long, dark tunnel into teenagerhood. It’s no fun and I can tell you, I’m only just starting to come out the other side. And the best part for you is you get to ride the tunnel three times!”

So without realizing it, I had developed a streak of sarcasm and cynicism throughout my evolution as a mother. It had become sharpened like a razor – to the point where last week when, in all sincerity, I congratulated the kids on being ready for school in time (a first since school started), my “Well done guys!” was met with “Are you being serious or sarcastic, Mom?” from my eldest. The younger two waited with curiosity for my response. Ouch.

My scorn wasn’t even that apparent to me as I drove alone through town the other day behind a car with  “CHILD ON BOARD” written just like that in serious big, black, block letters on the serious white background of a bumper sticker.  No cutesy stick figures, no girly-whirly pink princess crown with “Princess on Board” in pretty cursive font.

Stuck in traffic behind the BLOCK LETTER advisory, I thought out loud (I think I may have actually shouted it), “I am SO glad you’re informing that there’s a child in your vehicle because without that sticker, I would otherwise be ramming your car violently from behind like an enema!!”

How did my attitude toward anything child-related get so dark?  And dear goodness, what was I doing to my kids with my daily drips of cynicism and derision?

Then last Saturday morning as I dragged myself out of bed, I got a text from my girlfriend who’d had my daughter for a sleepover the night before (she and I switch off every weekend to share Saturday morning ballet class). She had dropped off both our girls at dance that morning.

Text read: “Haven’t told the girls about horrible news from CT. Today’s ballet class is the parents’ exhibition. One of us should probably go.”

I threw myself together and made my way over to the ballet school where my daughter and her little friend were warming up with their group in prep to perform arabesques (ballet speak for leaps).

Like me, my girlfriend has older kids. Our 8 year-old daughters are our youngest children so get paid the least amount of attention. Unlike the other little pristine British girls in their class with their hair neatly tied in proper, regulation ballet buns with a pink ribbon surround, our little girls sported self-made and unruly, loose pseudo-buns (pony tails that are pulled-through half-way into a loop). My daughter’s curls had escaped from the elastic and were flying messily in her face. My daughter’s little friend was barefoot since my girlfriend hadn’t sewn in the regulation elastic into her ballet slippers, which kept falling off until the teacher asked her to remove them altogether. The two of them as a pair were like higgledy-piggledy raga-muffins in a sea of pristine pink.

And yet, they were more beautiful than I’d ever seen them before. And my eyes welled-up with tears at their loveliness – at their innocence and their joy. And every single little girl (from age 3 to age 8) in that show was a just as perfect and beautiful and innocent and joyous as the next one. And they all smiled proudly as they clomped around the room like dainty baby elephants trying to be gazelles in sincere belief that each and every one of them was a prima ballerina.  And even to my trained, cynical eye, they all were prima ballerinas.

When the girls finished their performance, I was the obnoxious loud American who stood and clapped and whooped louder than any other parent there. And I hugged my girls extra hard and told them that I’d never seen anything more spectacular or impressive than that very performance. Because it’s true– I hadn’t. I’d forgotten about the beauty of childhood. 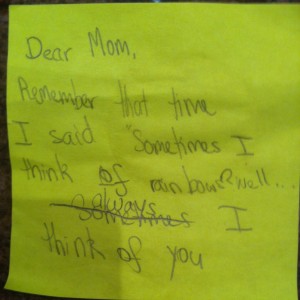 And yesterday during my middle child’s class Christmas party, his classmates had me play Skrillex’s “Scary Monsters and Nice Sprites” (a song that really, only a teenager could love) and they insisted that my son do a command dance performance – what he’s come to be known for. So my otherwise shy, unassuming 11 year-old got up and did his thing, which was part break-dancing, part hip-hop. Very unrehearsed. Very spontaneous. Incredibly cool.  I didn’t even film it. I wanted to enjoy the moment for what it was—a kid who loves music and dance and basking in the glory of just being a kid.

With the heartbreak and devastation of having to learn about each one of those beautiful babies who died at Sandy Hook and the dedicated teachers and administrators that went to heaven with them, I have realized that I’ve taken too much for granted.

Being a parent is not a right. It is a gift and a blessing.

I’m not going to make any false claims as to my parenting. I’m sure my kids will attest to the fact that their mommy can still be an über b-tch. The thing is, this über b-tch mommy again, after all these years, finds it all– if not miraculous– then really truly “okay”—baby talk, and messy chocolate-covered faces, and whining, and unruly hair, and insanely unorthodox music, and yes, even XBox.

5 responses to “child on board: a post-sandy hook reflection”