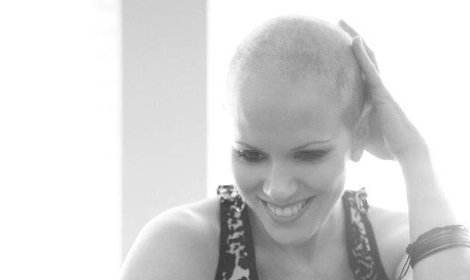 A few weeks ago over the children’s spring break, while the family and I were on a train to Scotland for a wedding, I opened my Facebook InBox to discover a heartbreaking message from my girlfriend, Becky, whom up to that point, I hadn’t known very long but who I now consider one of my dearest friends. She announced very matter-of-factly, with apologies for sending out the blanket message, that she had been diagnosed with breast cancer and had made the decision to return to the States within the next few weeks to seek treatment. She went on to state that her husband would see their two little girls through the end of the school term until December when they would all follow Becky and repatriate back to Colorado. My friend assured all the recipients of that message she would be fine – that she was strong and would turn to God to see her through this dark period of uncertainty.  And that was that.

The non-emotional nature of Becky’s message had the exact opposite effect on me. I was devastated and felt as if I’d just been sucker-punched.

From my seat on the train, my eyes scanned the rolling  green hills of Scotland which stretched on for miles. Cows and sheep. Nothing but grey skies and rolling hills and cows and sheep.

I smiled ruefully as I remembered Becky’s love of sheep. Her fondness for them was such that the theme of her birthday party the year before was indeed, sheep. Cake with sheep, presents with sheep, etc.  I’d even fashioned a sheep for her out of a condom we’d taken turns blowing up and decorating with my partners-in-crime — Karina, Maile, Cindy, Sam and Tara in the ladies room of the restaurant where we celebrated Bex’s bday- much too the amusement of the other patrons (this is England- Brits are almost always entertained by naughty humor). We taped little eyes, ears and feet that I’d cut of black construction paper onto at least 5 versions of our “sheep”. (They kept exploding but Maile refused to give up!) Eventually, we all emerged from the ladies room ceremoniously carrying the condom-sheep as if it were the most fragile porcelain doll in the world, singing Happy Birthday at the top of our lungs. Becky was at first confused, then suddenly got it and screamed out with laughter.

The train pressed on north. There was a break in the overcast sky and my mind wandered back over the events of the past year to even earlier- when we’d first met Becky the autumn before. We were all sitting around Tara’s kitchen table for coffee one morning.  I remember assessing Becky’s beauty in silence (a rarity for me).

Becky’s features have perfect symmetry. She has wide-set brown eyes with naturally long,“come-hither” eyelashes; wavy, shoulder-length, deeply dark mahogany hair that has that tousled and sexy look; a smooth complexion and slightly pouty lips.  Her smile is straight off a Hollywood billboard.

It’s Becky’s inner beauty that sweeps people away though. Her character is gentle. Her approach is soft. Always soft. Her hands move gracefully about like butterflies as she speaks. And when she talks, her gentle and calming voice envokes the visual of a modern day princess –the non-wishy-washy kind who uses her grace and femininity to secure what she wants.

Her small-framed body, like her face is just as enviable. This I know because for some reason during that coffee, the topic of tattoos came up and Becky gave us a glimpse of the most intriguing body art on her shoulder.

My phone interrupted my thoughts and I looked down to see the responses from friends who’d just heard the news. Tara sent out her prayers of hope through tears. Molly wrote that she and Mike had seen the message and were saddened and shocked.

Then my mind wandered back again into the past to the shared “tatoo” event that had kicked-off our friendship with Becky– it was with my husband, Simon, and Mike and Molly.

It wasn’t until few week’s after that first meeting with “Beautiful Becky”, as she came to be known amongst our posse, that I was treated to an exhibition of the rest of Becky’s tattoo. The girls and I co-hosted a Christmas party at Tara’s. I was sitting with Mike on the staircase—making small talk and assessing the scene. We watched as Becky made polite banter with guests who, for the most part, were other parents from the school my children– not Becky’s, attended. Since she and I had kids at different schools, seeing Becky was a treat.  Mike and I remarked, not for the first time, on Becky’s beauty. I mentioned how Becky had a really cool tattoo on her shoulder.

As if aware that we were talking about her, Becky turned to look up at us and made her way over.  Mike made up some nonsense about his wife considering getting a tattoo (HA!) and I sheepishly admitted to Becky that I’d told him about the preview she’d given us a few weeks earlier. She smiled back conspiratorially at both of us, attempted to pull down the shoulder of her dress, gave up and said, “Wanna see the whole thing?”

And as men will be men and not needing any encouragement, Mike raced through the house to find the two people in our lives who we knew would a) also want to see this and b) give us a hard time if they found out we were getting a private showing of Becky’s body art without their presence. He tore his wife, Molly, away from an intensely engaging conversation and yanked Simon off the dance floor to push them both up the stairs, two steps at a time, before Becky changed her mind.

Upstairs Becky removed her black button-down dress to reveal the most intricate tattoo I, for one, had ever seen. It started at the top of one shoulder and wove down, in leafy designs all the way to the base of her spine and slightly lower.  It was drawn almost exclusively in black– vines and flowers growing wildly and seductively up the trellis of Becky’s body. The only colored object was a small green and yellow spotted frog – innocuously positioned just near the nape of her back. I’d never considered tattoos works of art until then. Molly and I remarked on the incredible design. Simon and Mike were speechless (another rarity).  Becky buttoned her dress and seemed bashfully pleased that we were just as enamored with her body-art as she was.

Looking back, her tattoo was a metaphor for her character. She was reserved in public but daring and bold underneath. Superficially and at first one was attracted to her physical appearance but as her close friends, we’d discovered the unlikely pairing of timidity and fearlessness. To the outside world, she didn’t come across as the sort of girl who liked to party. She was just that very pretty, young mom who spent most of her time with her daughters.

Any occasion that called for celebration, however, Becky was there with bells on.

Our other girlfriends, Cindy, Maile and Karina, had moved back to the States, summer came and went and those of us who remained celebrated Tara’s birthday together in August. Karina, Maile and Cindy all came back to London a month later to mark Karina’s benchmark bday. We all met at Heathrow and took her straight to the Spa at Coworth Park, an insanely beautiful hotel in Ascot, to kick off the weekend celebrations.

It was there in the calm, white luxury of the dressing area at Coworth Park’s spa that Becky revealed she’d tested positive for the gene that is associated with breast cancer. Becky explained her mother and her grandmother and her aunts had had cancer – hence her need to find out if she too was prone to the disease. We were stunned but Becky calmly reassured us she was staying on top of it. She’d had mammograms every 6 months as opposed to annually. She’d already met with breast cancer specialists and even a reconstructive plastic surgeon so she could be proactive about removing the chances of getting the disease before it got her.

Becky later told me that it was that weekend, Karina’s birthday weekend, she’d discovered the lump. She said nothing to any of us but decided to wait to determine if it wasn’t a false alarm. Shortly thereafter, she met with doctors and more breast cancer specialists here in England who were well acquainted with her case. They examined Becky and all but assured her it was nothing. They did a biopsy and said they’d call her if they found something but “not to worry, it was surely just fibrous tissue.”

It’s been a whirlwind since that nostalgic train ride to Scotland.  Spring break was over almost before it started. We were all back in London a week later and bombarding Becky with coffees and lunches and London gallivants and dinners since her only request was, “to see my girls (us) as much as possible before I go.”

Karina, who now lives in America too, offered to fly to Colorado to accompany Becky on consults, hang out at the hospital, or hold her hand through chemo or anything else that Becky’s treatment demanded. I sat there with a lump in my throat at hearing Karina’s offer which she insisted Becky take (although it’s doubtful Becky ever will- sometimes Becky shyness trumps all). Karina said, “How could you question it? She’s one of the girls.”

Almost two weeks have passed since Becky left England. It’s been harder than I thought it would be but I’m focusing on the future and already looking forward to the next reunion.

This group of ours– this originally London-based inner circle, had already considered ourselves an incredibly close-knit set, bound by… well…the kinds of things that bind close girlfriends together in general– a chain with links of secrets and laughter and shared pain and joy. 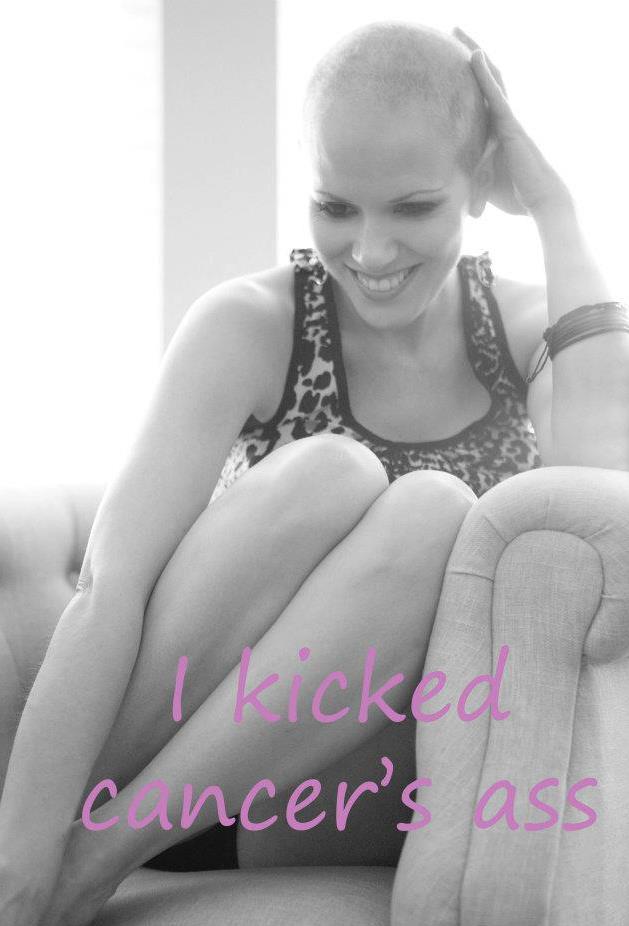 There have been almost no tears because tears would mean a dramatic end to things and there’s nothing dramatic because nothing is ending. As a matter of fact, I would even venture to say that Becky’s cancer diagnosis really sealed the beginning of something else— a forging of a collective friendship even deeper than any of us could have foreseen individually.

For my part, Becky’s friendship is truly one of life’s greatest gifts. It took cancer to get here. And ironically, the irony is not lost on me.

Update one year later: Am thrilled and grateful to report that Becky has fought and won her battle with cancer and is now in remission. Her hair has grown back – which makes very little difference since she was breathtakingly beautiful with no hair at all. This week Becky celebrated another birthday which to our set, is intensely meaningful.

Happy Birthday Beautiful Bex! Here’s to many, many more birthdays to come.