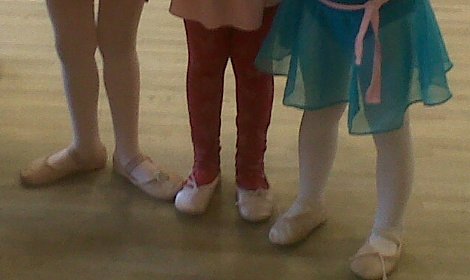 british ballet and the arabesque to redemption

My last posting about sports had me detail my “sports mom” deficiencies as a misfit hockey and soccer mom.

So, is there hope or salvation for someone like me? Alas, I thought that might well be the case with my little girl who does ballet. After all, ballet is an ART not a sport.  I also mentioned in a previous essay on parenting that for a pre-Christmas ballet show, where all the other little girls were visions of performance perfection, my daughter and her friend (whom I am in charge of when it’s my turn to drive) were less than “preened”.

As a child, I harboured ambitions of one day becoming a ballerina myself. I religiously signed-out over and over again every ballet book every published from my elementary school library and dreamt of attending White Lodge here in England—the feeder school for Britain’s Royal Ballet. Having a little girl taking ballet here in Britain for me meant that maybe one day she could audition to attend there herself.

As a student in St. Petersburg, Russia, I went to the Marinsky Theatre EVERY WEEK to attend the ballet. The host family I was staying with managed to procure me 3rd row seats via a post-Communist family connection. Watching Romeo & Juliet was the first time a dance performance brought me to tears.

My love for ballet led me to believe that I stood at chance at being a competent ballet mom. I’m good about getting my daughter to dance class on time (sorta kinda). I did thorough research on the best school I could find in the area and enthusiastically buy all her dance gear and sew in the elastic to keep her ballet slippers in place (at hockey games!). I even have her do daily leg lifts and stretches on our kitchen counter. Enthusiasm! Encouragement! Support! PROGRESS. One would think…

British ballet school vs. American ballet school is where cultural differences come into play and deal a cruel, cruel hand to someone like me who is still struggling to find her way amongst the sea of “with it” sports moms.

We North Americans think we know what ballet rigor for little girls is? HA!

Meet the “British Ballet Mummies”. They are as serious as a funeral.  (I’m not kidding, I have yet to see one crack a smile). THEIR daughters are always properly turned out. THEIR daughters are never late to class. Unlike all the princess fairy ballerinas at beginner ballet classes all over the States with fluffy, sparkly tutus and maybe even fairy wings, magic wands and tiaras to boot, there is NONE of that Tom Foolery over here in England! Children of the British Ballet Mummy take the art seriously and don regulation uniform – with regulation colour leotards, socks and tights in accordance with the pupil’s level; regulation belts; and regulation hair ribbon. Think military.

Very much akin to the dedication of hockey parents, the British Ballet Mummy has introduced her daughter to the barre from the moment their little girls can raise their heads and point their toes. My (American) girlfriend and I have, on separate occasions, been taken aside not-so-discretely by the ballet school director after class to be scolded because our daughters have missed a (as in ONE) class and failed to show up for the remedial session. The collective tuts-tuts from the British Ballet Mummies are almost Monty Pythonesque.

And there are ballet exams. EXAMS!! Many little girls far smaller and younger than my daughter have taken their dance exams and are therefore qualified at a higher level. For the record, my eight year-old has been doing ballet now for three years outside the British system.

Several Sundays ago was my daughter’s first ever ballet exam. There were many rehearsals and classes leading up to that morning’s test. My girlfriend and I were very American in our approach toward these exams – “Why stress the girls? Ballet at this age is supposed to be fun!” Alas this positive attitude falls deaf on the ears of the British Ballet Brigade.

The morning before the exam, I and another American (of course) mother were taken aside (again) by the ballet director.  The ballet director was having a mild coronary because although the school had done everything to prepare our girls for the Royal Academy of Dance Exam (or something to that effect), our daughters didn’t have EXAM shoes. The horror!!! Honestly the stares of disbelief from The British Ballet Mummies looking on could only be equated with an entire row of older women at the opera who have had a face-lift—permanently raised eyebrows and that overly astonished look.

“But it was on the List!” the director practically hissed at me when I said, in all sincerity that I had no clue what she was talking about. My non-reaction to seemingly dire circumstances tends to offend.

Apparently, the List was mailed out when we registered for the school last year. It was on a piece of paper (vs. email). Okay seriously?  PAPER?! And where, pray tell, is my push text reminding me to check my email about what is required for the exam?!

NO emails or texts. Notices are on a notice board and I mean a real notice board made of cork with plastic push pins holding pink carbon copies of who is taking the exam and what time their slot is. Very old school.

But let me interject by saying that in the grand scheme of things and after events like Sandy Hook, not having EXAM shoes for my eight year old child registers pretty low on the scale of life’s true anxieties.

Given that the ballet school director was by now also developing a visible nervous tick (on top of her coronary) at my obvious non-acceptance of the severity and potential devastation of the situation, I (for once!) bit my tongue and refrained from sharing “Catherine’s Pearls of Opinionated Wisdom” at that moment in time. Even I know when “less is more”.

We did get the EXAM shoes that day– which are, I have now learned, never-worn-brand-spanking-new ballet slippers. I also bought my daughter a new ballet skirt. Hers had a Nutella stain smack-dab in front. My new friend  – the other non-British Ballet Mummy and I joked that because our girls – mine, hers and my daughter’s friend had been grouped into one subset of three pupils (the slightly older set who had recently transferred into the British system) and would most likely be either late, untidy in appearance, and/or food-stained—they could be introduced as the “special needs” group. As luck would have it, all three are American.

We wondered aloud if it might be calling attention to our American-ness if we gave them the “Now-Just-Get-In-There-And-Have-FUN!!” speech beforehand. I suggested we paint our tummies in pink and white war paint with GO YANKS! Nobody can accuse THIS mom of not getting into the spirit of things. I am a former cheerleader afterall.

We both, however, know that “When in Rome…”

My new friend and I casually put it out there to our little exam takers that we “wouldn’t be entirely opposed” if they chose to put on a British accent – for the British examiner, if they felt like it….

To uphold their reputation, the dance school had us deliver our girls a full hour early so they could be prepped by someone (ANYone!) that was not us. Our “examinees” had their hair styled in regulation EXAM buns and were given a regulation leotard. It really is serious business. But is it all worth it?

All I know is that half an hour later when my daughter came bounding back from the exam studio with a huge smile and a winning attitude to match, declaring the whole experience “AMAZING!!” I did mentally give myself one point for moving up on the ladder of misfit redemption.

6 responses to “british ballet and the arabesque to redemption”