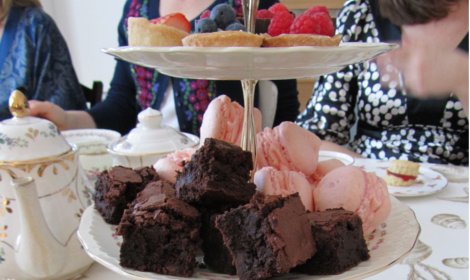 “Daahhling, are you sure you’re not lesbian?” asks my über-posh British friend, Daisy*, over vodka tonics with lime cordial and an extra squeeze of lime.

We’re in a hip and cooly pub in London and Daisy is watching me ogle two women who are standing at the bar ordering drinks.

I’m used to Daisy’s question. She asks me this every time I people watch. Honestly though by now and after knowing each other almost twelve years (a veritable light year in facebook speak), Daisy should know me well enough to realise that I am incapable of people watching subtly—especially if they’re beautiful.

“Daisy, check out their skin-tight dresses and my GAWD how can they walk in those shoes?!” Dresses, I glean are Alexander Wang and Victoria Beckham. Shoes—Manolos and Louboutins.

The women look straight off the pages of Tatler Magazine- pristine, dressed-to-kill Sloanies who are undeniably British—chic, glowing, fit.

Daisy takes her time turning to look casually, inconspicuously over her shoulder.

“Oh don’t be silly, Dahling! They were at Ascot today,” she says –cool and nonplussed as she turns back around to take a sip from her drink which is the perfect elixir for such an usually warm and muggy day in England.  Daisy is in town from her house in the country, as a matter of fact, to do Ascot the following day with her husband and friends.

It’s only now that I notice that there are two (also very attractive) men in morning suits standing directly behind the women. One of them is carrying a top hat.

Ah yes!  Ascot (pronounced “ASkit”)— the grounds where the crème de la crème of Britain race thoroughbred horses with the Royal Family in attendance but more known for the Pomp & Circumstance fashion parade of outfits and matching hats in every style, taste and budget imaginable.

I should have realised this with all the FaceBook posts this week of “Royal Stalking” and millinery grandeur.

At Ascot, “FABULOUS is the new black.”

Ascot stages twenty-six days of racing over the course of the year, comprising eighteen races held between the months of May and October inclusive. It was during a September race back in 1988 that I’d had my first Ascot experience.

Many moons ago when I still had  “teen” as a suffix to my age, I called a friend of mine, *Philip, to let him know I’d be passing through London before embarking on a study-year abroad in France.

I met Philip for the first time a year prior at a hotel hidden away in the deepest jungles of Kenya where I’d visited my closest friend, *Marla, and her family who were posted in Nairobi at the time. Philip and his girlfriend “du jour”, *Harriet, were there on a safari holiday. They were about ten years my senior and the most beautiful couple I’d ever seen. (I probably gaped back then too).

We all bonded one night at about 3am while watching a lone elephant make its way onto the dimly-lit salt-lick of the hotel grounds.  So as not to disturb the animals, the hotel imposed a strict “no talking” policy after 9pm. We were all whispers and hush-hushes as we admired that great creature limber regally across the clearing.

The following week, Marla’s family had Philip and Harriet over for dinner. We discovered that we were leaving Nairobi at the same time so they took me under their wing as we made our way back across Northern Africa and over to Europe. We grew even closer over that journey because Kenyan President Moi had commandeered our aircraft—appropriating it to several of his family members –effectively bumping us off that flight.

We eventually arrived back London, via Cairo, and they offered me one of their pied-à-terres for the night before I headed home to Vancouver.

By the time I returned to Europe a year later and thanks to snail mail, postcards and phone calls, Philip and Harriet had become my close friends.

“Smashing! Of course we’ll come to collect you from the Heathrow, Dahling!” bellowed Philip over the phone. “We’ll take you onto Ascot straight from there. It’ll be great fun!”

“You do know about Ascot, don’t you Dahling? The famous horse races?”

“Yes of course, Philip!! Who wouldn’t know about Ascot??”

Me. I knew nothing about Ascot at the time. What the hell would a Philippine immigrant teenager from Vancouver know about Royal Ascot?!

And seeing as the Internet had yet to be conceived and that schlepping to the local library to look it up old-school was too much of an effort, I chose to sit comfortably in my youthful ignorance. Horse races. Not my thing but okay.

“Brilliant! Just head straight out of the terminal when we you get here. We’ll be in the red car, Dahling.”

So here I come ready for this “horse racing outing”– straight off the flight from Vancouver, BC —  the ink not yet dry from my high-school diploma handed to me several weeks prior.

I am feeling like THE BUSINESS in my 1980’s acid wash jeans and matching (!!!) jean jacket. I believe they were GWG denims, rolled up on the ends. Hell, allow me to exercise artistic license here and throw a neon scrunchy in my hair—just to complete the visual.

Over my arm I carried a long, khaki-colored London Fog  trench (a prestigious brand back then which, if it still exists, can be purchased at the also(!) very prestigious Burlington Coat Factory—if that place still exists).

Why do I remember my clothing and that trench so vividly? Because I could not have been more inappropriately dressed.

The first thing I see after exiting customs is Harriet waving to me cheerfully with a huge smile on her face. She is wearing a beautiful fuschia cocktail dress with an enormous (HUGE!!!) matching hat and delicate heels, dyed to match.

I think to myself, “She’s awfully dressed up. They must have ditched their plans for the horse races and accepted a last-minute invite to a wedding.”

“What was the name of the racing thing Philip had mentioned –Ashby? Askley? Askit?” I look down at my glaring 1980’s denim concoction and back up again at Harriet’s hot pink finery.

“Didn’t you say you were taking me to the horse races?” I whispered into her ear as she gave me a big squeeze. I’d only ever been to races with one of my shady uncles who was supposedly “babysitting” me and my siblings. For that sort of venue, my GWGs were smack on target.

Harriet took absolutely no mind of the fashion catastrophe that was me and cheerfully lead me outside to where Phillip was waiting for us by the “red” car.

Philip, of course, was surrounded by a small sea of paparazzi—who were clamouring for a shot of the celebrity who was surely due to exit the terminal at any given moment before climbing into Philip’s red FERRARI.

If I had been white (as in Caucasian), I would have been as red as that Ferrari.

I’m not even sure it’s possible to describe the visible and palpable disappointment in all those photographers’ faces as I exited the airport into their rapt, collective expectation of a real “somebody”.

Instead they got me– a sleep deprived, scrunchy-haired, teen with a trench coat pulled up STRANGLE-TIGHT around my neck (of course I pulled the trench on the second I saw Harriet’s outfit!!).

It got worse, if that’s even possible.

Philip and Harriet couldn’t have been nicer. They incorrectly assumed I was doing a teenagery thing and flying in the face of convention against the norms of respected British pomp. They were cheerful and eccentric and cared less about my glaringly non-Ascot outfit (or were doing a great job of pretending so).

We walked around the grounds and they happily and proudly (?!) showed me off to friends and acquaintances dressed as beautifully as themselves – introducing me as “their young friend from Canada.”

I felt like a bewildered Asian specimen that had just been extricated from a “just off the boat” crate—my acid-wash outfit literally burning me to shame from the outside-in.

MORTIFIED. As in I WAS DYING A THOUSAND DEATHS.

“Catherine we’ve got a wonderful surprise for you!”

Oh no. No more surprises. I couldn’t take it. Already I was turning blue (from my invisible red!) through my numerous and unsuccessful attempts at trying to strangle myself with my trench coat.

“We’re having Tea with the Chairman of Ascot, Dahling!” announced Philip practically giddy with delight. Harriet stood beside him beaming from under her huge hat.

No wonder the British are so good at swearing. I believe it was in This Great Land that I first embraced the use of the F-word as valid punctuation.

So yes, I have been to Ascot. Yes, I DID have “Tea-for-Three” with cucumber sandwiches and scones with clotted cream. And yes, I was, in fact, seated alongside The Chairman of Ascot that memorable afternoon.

OH what I would give for none of this to be true!!!

Were there any Royals there that day? Indeed there were! Sarah, The Duchess of York. Philip made me wave to her.

Ascot, please note, has a VERY strict and strictly-enforced dress code today – ensuring that no undesirables in disrespectful, inappropriate attire show up to downplay the crowds of The Beautiful on equestrian pilgrimage to this gorgeous corner of Berkshire year upon year.

And in support of strict dress codes, I only have one thing to say.

* I absolutely changed names. I like to keep my friendships lifelong:-)